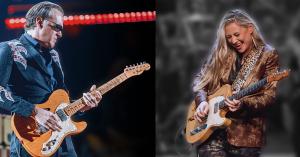 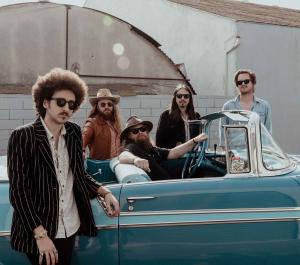 I wanted to take what I've had to learn the hard way to create a company that could make navigating this process a little easier.”
— Joe Bonamassa
DEERFIELD , FLORIDA, UNITED STATES, January 24, 2023 /EINPresswire.com/ -- Journeyman LLC, the newest endeavor between Blues Rock icon Joe Bonamassa and his long-time manager Roy Weisman, is a full-service artist management, record label, concert promotion, and marketing company that builds awareness for independent artists worldwide. Journeyman provides the infrastructure needed to jumpstart the careers of exceptional independent artists, who are too often overlooked by the major labels or concert promoters while circumventing the resistance of typical “gatekeepers” who don’t support indie acts. Bonamassa is passionate about leveraging his experience to pay it forward and help other artists navigate the industry’s murky waters, setting Journeyman apart as the true market maker for its roster.

Under the Journeyman Records banner, Bonamassa and Weisman utilize the same savvy tactics that they perfected in building Bonamassa’s career to launch artists like Joanne Shaw Taylor and Robert Jon & The Wreck, overcoming the industry barriers that typically hold back artists. “This is about an Independent label breaking music industry trends,” Weisman reflects. “Helping these artists develop and nurture a fan base builds a connection so that when they release their album and go on the road, the stage is set.”

A partnership with Journeyman Records affords artists the opportunity to work with the world’s top producers and release a steady stream of high-quality music on an ongoing basis, cutting through the industry chaos. The first to join the label was British-born blues-rock sensation Joanne Shaw Taylor, whose talents are poised to make the company's entertainment division the most successful since Bonamassa and Weisman's creation of J&R Adventures. Using Journeyman's keen concert promotion and music marketing skills, Taylor has transitioned from clubs to theaters, and tickets for her 20-date US Spring tour, launching March 19th in Clearwater, FL, are selling well across the country. These same tactics helped launch Bonamassa’s career, bringing him from small clubs to the world’s most prominent stages, and catapulting him to stardom as a recording artist and touring act.

2023 is shaping up to be another gangbuster year for Journeyman and its roster, whose breakthroughs in the studio and on the road will transform them into highly recognized and respected artists. The latest single released on the label was the Americana-infused “Who Can You Love” by Robert Jon & The Wreck. Produced by the legendary, multi-GRAMMY Award winner Don Was, the song will be featured on the band’s new EP ‘One Of A Kind,’ slated for release in March via Journeyman Records. Robert Jon & The Wreck’s new partnership with Journeyman affords them the opportunity to work with the world’s top producers and release a steady stream of high-quality singles on an ongoing basis, cutting through the industry chaos and ensuring new music is accessible to fans as intended.

ABOUT JOURNEYMAN, LLC
Journeyman, the newest endeavor between Joe Bonamassa and his long-time manager Roy Weisman, is a vertically integrated music management, concert promotion, and marketing company that builds awareness for great live artists worldwide. After years of perfecting strategies, while building Joe Bonamassa’s career, the company will utilize the same savvy tactics which allowed them to overcome industry barriers that typically held back artists from achieving success. Journeyman provides the infrastructure to take an artist from relatively unknown to record music and tour without dealing with the typical resistance of “gatekeepers” who don’t believe in or support independent acts. Bonamassa has been keen on using his experience to pay it forward to help other artists navigate the murky industry waters. Consequently, Journeyman sets itself apart in this way as being the true market maker for its artists.

ABOUT JOANNE SHAW TAYLOR
Joanne Shaw Taylor was discovered by Dave Stewart of the Eurythmics at the age of 16 who, having watched her play, immediately invited her on the road with his supergroup D.U.P. A career in music was born and in the preceding years, her incredible guitar-playing saw her build an army of plaudits including Jimmy Cliff, Joe Bonamassa, Stevie Wonder, and Annie Lennox.

Still, only in her 30s, she has become one of the most sought-after guitarists in the world of rock. She released her first album on Ruf Records entitled White Sugar (2009), unleashing her distinct soulful voice on the world, and demonstrating a songwriting prowess way beyond her years. Over the next few years, she released critically acclaimed albums including her sophomore album Diamonds In The Dirt (2010), Almost Always Never (2012) which featured the UK radio hit “Soul Station,” plus her final album for Ruf Records, the live album Songs From The Road (2013).

In 2014 she released her fourth studio album The Dirty Truth on Axehouse Records which featured the singles “Mud, Honey” and “Wicked Soul.” In 2016, Joanne followed up with the release of her fifth album Wild (Produced by Kevin Shirley) which saw her perform songs “Dyin’ To Know” and “Summertime” on BBC Two Television’s popular music show “Later With Jools Holland.” Three years later, in 2019 she signed to Silvertone Records via Sony Music and released her sixth studio album, Reckless Heart.

Over the past two decades, Taylor has proven herself as a prolific songwriter, with seven acclaimed albums under her belt, each increasingly more successful with her 2019 Reckless Heart breaking into the UK Top 20 Album Chart and cementing herself as one of the most important exports in British blues-rock.

The Blues Album produced by Joe Bonamassa and Josh Smith at Oceanway Recording Studios in Nashville, Tennessee, marked her seventh studio album and was her first release on Bonamassa’s independent label KTBA Records in 2021, debuting at No. 1 on the Billboard Blues Charts. In 2022 Joanne received her second No. 1 Billboard Blues Album with Blues From The Heart Live, also released on KTBA Records.

ABOUT ROBERT JON & THE WRECK
Reigning from southern California, Robert Jon & The Wreck take the southern rock sound from the east coast and make it their own. Since their inception in 2011, these four native Californians; Robert Jon Burrison (lead vocals, guitar), Andrew Espantman (drums, background vocals), Henry Schneekluth (lead guitar, background vocals), and Warren Murrel (bass) have been electrifying audiences all over the world with their soaring guitar leads, rich vocal harmonies, and memorable tunes. Fueled by this success, RJTW took the road again delivering fierce performances, emblazoned with commitment, and dripping in a rawness that’s impossible to fake. Simply put, it is difficult to ignore when these talented musicians take the stage. Little wonder they have made an impact on audiences across the world, where they’ve played a run of sold-out shows and proudly shared bills with talent the likes of Joe Bonamassa, Walter Trout, and Rival Sons. The Wreck found their flow with yearly tours, returning to California and prolifically releasing new music. 2021’s studio album Shine A Light On Me Brother gained worldwide acclaim. They teamed up with Joe Bonamassa’s independent label and released two singles in early 2022 “Waiting For Your Man” and “She’s A Fighter.” On September 30th, The Wreck released their latest Album “Wreckage Vol. 2” which has paved the way for even more new and exciting music from the band. 2023 will be an incredible year of touring and new music from Robert Jon & The Wreck. To stay updated visit www.robertjonandthewreck.com. #GetWrecked

For inquiries or corrections to Press Releases, please reach out to EIN Presswire.
✕
× Close Ad