Leo Holsey said, “I started last year it helped me be where I am right now, be a leader. It kind of helped me mature to be a better playmaker.”

After going through the expected ups and downs as the Sweetwater Quarterback in 2018 as freshman, Leo Holsey has taken the 2019 season by storm as a sophomore. In the Mustangs district opener, Holsey was on a different level, passing for 351 yards and four touchdowns and rushing for 62 yards on three carries in the Mustangs 45-8 win over Lamesa.

Head Coach Ben McGehee said, “It’s night and day, last year he was just coming out of 8th grade as a freshman. His eyes were wide and he was just trying to survive at times, learning gameplan and now he’s got the confidence. He knows he can do it, and he attacks every day.”

Holsey said, “I couldn’t get anywhere without my teammates, my o-line did great, I didn’t get sacked. Receivers caught the ball, we can make plays against anyone and we’ve shown that all year and it’s going to lead us to hopefully winning out and making the playoffs.”

Holsey’s performance was the perfect way for the Mustangs to open district play and perhaps open the floodgates for a potential playoff birth as well.

McGehee said, “He’s a competitor on and off of the field, I think that spills over to his teammates whether he’s in the weight room or on the practice field or in the classroom. More than anything, he’s a leader by his actions.”

Holsey said, “You can only get better from this, we’ve got to keep moving forward and hopefully make a run at the playoffs.”

Leo Holsey, the Week 7 Ford Impact Player of the Week.

ABILENE, TX – The Abilene Sports Alliance is offering $10,000 in scholarships to graduating student athletes: One male and one female athlete from Abilene Christian, Abilene, Cooper, and Wylie high schools will receive this award.

Need groceries? Here’s how you can apply for a grocery relief card

Abilene boil notice: When do I have to boil my water?

What grocery stores are open in Abilene?

Stay warm! Here’s a list of warming centers open in the Big Country 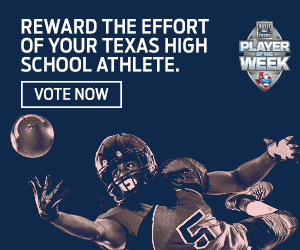 How did solar panels fair in Abilene during winter storm, power outages?

Wake-Up Weather: A clear and cold morning will make for an unseasonably mild and sunny afternoon